"WHY do people spray oils on the bottom of their vehicle?"

While getting an oil change once in Colorado I was told I had a severe oil leak, I told them it was an Oil Undercoat and they had never heard of such a thing.. This is because Colorado does not use road salt or chemicals on their roadways in the winter!

The salts and chemicals used in many northern states are used to prevent ice buildup on or roadways in the winter, but are also damaging to the underneath of your vehicle!

Metal surfaces in just a few short years of exposure quickly become rotted, leading to premature wear and failure of parts and ultimately leading to structural failure and severe safety hazards to your beloved vehicle. The first areas to fail are the hard to reach areas like wheel wells, the holes in frames and bumpers, where dirt and mud can stick where it is hard to get washed off. 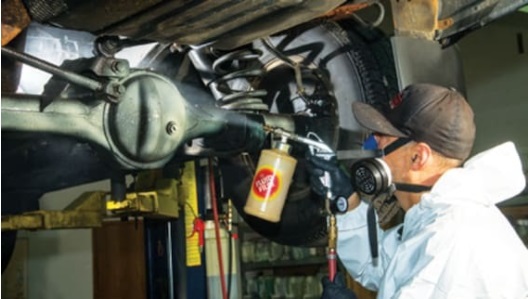 "Is is too late to undercoat my vehicle? It has already seen several winters!"

Over time your vehicles frame looses its factory coat of paint and protection from the environment, and erosion is inevitable. Undercoating adds a protective layer of safety between your vehicles structure and the harsh salts and chemicals, and also helps slow the erosion and spread of rust on vehicles that are already rusty!

By soaking into the metals, Undercoat will help preserve and extend your vehicles underside life.

Oliverian Automotive is now offering Undercoating for the fall season up until the first snowfall of the year!

Our prices and categorizing have changed, and is now broken into three separate categories; Small, Mid Sized and Large!

Estimated to take roughly an hour per appointment depending on vehicle size. Vehicles are treated and sprayed as if every vehicle is our own, becasue no one wants their vehicle to rust away! Call us at (603) 989-3277 or stop by at 847 Daniels Rd Pike, NH 03780 to get started today!

If You Have Any Questions Or Need Service Please Contact Us!